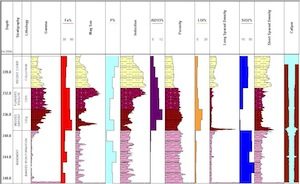 indicator of rock strength. Factors such as weathering, fracturing and porosity can be evaluated as these seriously affect mining and excavation characteristics. The density log is useful for locating fractures since open fractures intersected by the borehole often appear as low-density zones on the density log.

The density of rock is affected by porosity, water content, and composition. Most of the density variations within igneous and metamorphic rocks are due to variations in mineralogical composition. Rocks with higher percentages of mafic minerals (Fe, Mg silicates) have higher densities than those with higher percentages of felsic minerals (Ca, Na, K, Al silicates). The presence of minerals containing heavy elements such as base metals increases the overall density of the host rock often significantly. In sedimentary rocks, density variations may be a result of differing degrees of compaction (induration) rather than changes in elemental composition.

The density logs are derived from the gamma-gamma probe. The density tool is essentially a gamma-ray logging tool with the addition of a weak (10 millicurie = 370 MBq) gamma-ray source (Cs137) on the nose of the probe. The tool has a sodium iodide detector which measures gamma rays from the source that are backscattered by the rock around the borehole. Density information is determined from the count rate in an energy window above 200 keV. When the density of the rock increases, the count rate will decrease due to the change in Compton-scattered gamma rays reaching the detector.  The sample volume is smaller than for natural gamma ray logging since the gamma rays must travel out from the probe, into the rock and back to the detector. A 10 to 15 cm radius around the probe is "seen". Data are acquired at a logging speed of 7.0 m/minute, with a sample time of 1 second giving a measurement every 10 cm.